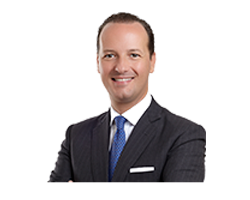 e-mail: This email address is being protected from spambots. You need JavaScript enabled to view it.

Bartolomeo Sammartino was born on May 17th, 1968. He is married to Olimpia Randazzo and they have four daughters, Ginevra, Costanza, Sveva and Lucrezia.

From November 7th, 1990 to June 21th, 1991 He specialized in the study for the diplomatic career following in Rome the “Preparation-Specialization Course” organized by the Società Italiana per l’Organizzazione Internazionale (S.I.O.I.), with the collaboration of the Italian Ministry of Foreign Affairs; during this course He studied International Law and of the European Communities under the best experts in the branch.

He won a scholarship offered by the Istituto Diplomatico in Rome to study French language and administration in Paris at the Ecole National d’Administration (E.N.A.) of the French Republic.

From October 15th, 1991 to January 14th, 1993 He was an officer at the Italian Revenue Guard Corps in the “Baschi Verdi” (a special antiterrorism and emergency force of the G.d.F.); in this period He took part in the “Vespri Siciliani”, a mission arranged in Palermo after the murders of the Italian judges Giovanni Falcone and Paolo Borsellino.

On March 4th, 2000 He is qualified with the mark 80/80 for teaching Philosophy, Psychology and Social Science in the secondary schools.

He speaks English fluently because He studied it in depth during his courses completed in Oxford, and French language thanks to his long stay in France.

During the academic years 1995/96 and 1996/97 He was a Voluntary assistant lecturer of Prof. Augusto Sinagra, who holds the chair of International Law at the Faculty of Law of the University of Palermo.

As an assistant to Prof. Paolo Ungari, he held the course in “Safeguard of Human Rights” at the School of Journalism of the University of Palermo starting from academic year 1996/97. He held the same chair also in academic years 1999/2000 and 2000/2001.

He is an expert in foreign policy having been a member of the researchers’ group coordinated by the U.S.A. Embassy and N.A.T.O. in Bruxelles. He also represented the Italian Republic in the circles of the visit programme of the most important military bases in N.A.T.O. and other European Security Organizations.

He was a scholar of Criminal Anthropology, chair directed by Prof. Gaetano Ingrassia, at the Faculty of Law of the University of Palermo from the academic year 1999/2000 to 2002/2003.

He is the founder and the national president of Accademia Nazionale della Politica (A.N.d.P.), a Culture Institute established in 1997. Its goal is to disseminate political and cultural education especially among younger generations. It has its offices in Palermo and the other branches are in Milan, Enna, Ragusa and Trapani. It is legally recognized by the Italian Ministry for Arts and Culture and it cooperates with regional, national and international political, cultural and scientific institutions.

Since 1996 He has been the Director of the Political and Cultural Studies Course of Accademia Nazionale della Politica. The course, master of higher political training, has been attended, during the single editions, by thousands of people and the most prestigious figures in the national and international politics, culture, religion, science and economics.

Since 2004 He has been the Artistic Director of the Art Exhibition “Mitincanti”, an initiative that thanks to its different sections (theater, opera, cinema, music, dance and figurative arts) helped in launching and success of many young talents in the national and international Art survey. “Mitincanti” has occupied an important place in the production of new shows produced specifically for the exhibition and it has stand out for the opening of new tracks of civil, ethical and cultural researches, also thanks to the experimentation of new forms of artistic communication.

He has been creator and promoter of the initiative, organized by the Academy in 2004, dedicated to “I Luoghi dell’Anima”, routes to develop the tourist marketing of the territory, the ambient and eno-gastronomic promotion, both Sicilian and Italian, in its cultural and traditional expressions, through the visit of resorts and scattered on the territory, of a specific, spiritual, historical, cultural and Landscape significance, and with the support of a certain prestige guides.

Since February 2009 He has been Editorial Director of “Centro e Luce”, series of books and publications dedicated to the history, art, to the Mediterranean culture and to important authors whose reflection has attracted the public opinion and has stimulated the cultural debate about historical and topical subjects. The Series has been inaugurated thanks to Rodo Santoro’s book whose title is Castra et Palatia - La cultura siciliana dal Medio Evo al Settecento attraverso i suoi Castelli e i suoi Palazzi.

On June 22th, 2009 He was the coordinator of the Technical Advice Group, set up with the support of the normative activity promoted by A.R.S.’s presidency, in the person of the President Mr. Francesco Cascio, following up the signature of a prestigious convention between the Sicilian Regional Assembly (A.R.S. is the Sicilian Parliament) and Accademia Nazionale della Politica.

He has been the President of I.E.ME.S.T. (Euromediterranean Institute of Science and Technology), a research organization registered in the National Registry Office of the Research of Ministry University and of the scientific research with several publications in the most important international reviews with a considerable impact factor, researches financed by private companies of international significance, agreed up on CNR (National Research Council), for the development of the research in scientific area, and in many other national and international research organizations.

He has been the creator, coordinator and director of Promotion and Education and health Seminars for populations, in collaborations with the University of Palermo – Doctorate of Research in Experimental Biomedicine and Clinical neuroscience, medical association, psychological association, Italian Association Health Education, the hospitals and the Euro-Mediterranean Institute of Science and Technology. This initiative is realized with the intervention of young and illustrious personages from the world of medicine, science and society, and it is directed mainly to young people in high schools, technical institutes and university students that, till now, have assured a notable and careful participation, indispensable guarantee for a reaching of the formative and informative objectives arranged in advance.

On August 25th, 2010 He was named as Chevalier of the Academic Palms Order for services rendered to the French Culture, by decree of the Prime minister of the French Republic, on the proposal of the Minister of National Education.

He has received several awards for cultural merits and, among them, Pigna d’Argento Award and Jalari Award.

From February 2002 to June 2006 was a Member of the XIII Sicilian Parliament and member of the V Parliamentary Commission - Culture, Public Education, Training for Work.

From November 2003 to February 2003 He was Deputy Mayor and Spokesman for the Arts, tourism and sports of a Council of the district of Palermo.

On November 30th, 2007 He was elected town councillor of the city of Palermo and member of the V Council Committee Culture and Public Education of the district of Palermo.